How to make Windows Backup work

15,313 sysadmins have the solution. Now you can too in under 7 minutes
www.WBadmin.info

How does Windows Server 2008 Backup work?

Summary: Windows Server 2008 Backup (and its command line interface wbadmin.exe) are the new block-level backup infrastructure built into Microsoft’s latest operating systems. Old, traditional concepts like “Full backups”, “Archive bit” and file-based backups are a thing of the past. Instead, a brave new world of backups await… but it’s surprisingly simple. However, each new technology also has limitations, which are discussed as well.

The new block-level backup infrastructure in Windows Server 2008 (which is also in Windows Vista Business, Enterprise and Ultimate) is aimed at making server recovery fast. Let’s discuss how it works from a variety of angles.

For starters, the new WSB is a block-level volume image based solution. As such, it runs appreciably faster than file-level backup solutions as the usual overhead of opening and closing each file to be backed up is not required. As an image based solution, it is also geared towards fast system recovery, going the route that was pioneered by products such as Acronis, Ghost and Backup Exec System Recovery.

The specific implementation that Microsoft has provided has the following characteristics:

By default, the backups performed are fast differentials, where only changed blocks are backed up. (Note: Microsoft refers to them as incremental, but we believe differential to be a more accurate term.)

A good way to imagine how this works is by imagining your machine’s life disk volumes on the left, the backup device on the right, and an intelligent comparison machine in the middle, transferring blocks across.

The backup is then a "left-right comparison" with the differences getting transferred across, as shown in the diagram. 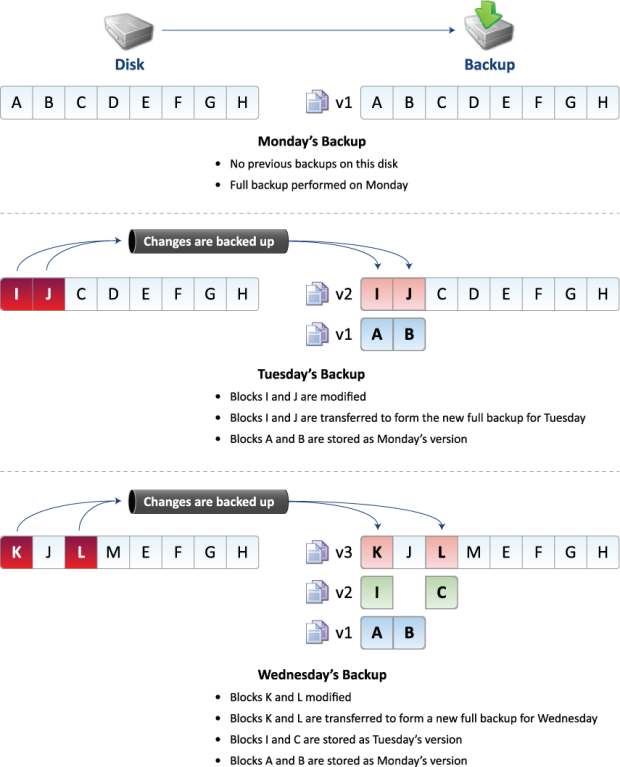 There are some very important things to note:

Another bonus is that you will never run out of disk space caused by the accumulation of previous backups. (Note: Of course, you will run out of space if the total data you’re trying to back up exceeds the capacity of the backup device.)

VSS based file and application backup

The entire backup system is based on VSS, which is used to tell which blocks have changed. The exact way this works has not been published by Microsoft; however from our testing we believe it to be based around using persistent snapshots and comparing differences between the snapshots.

Because the system is based on VSS (unlike some other drive imaging products), it means that it’s possible to backup VSS aware applications, like Exchange Server 2007, SQL Server 2005 and SharePoint Services. At the time of the backup, WSB will issue a notification to VSS that a backup is about to start, and in turn, VSS will notify the VSS aware applications to commit their data to disk. This means that the backup will be consistent, and any open databases will have their data committed and in a consistent state.

There are two different restore procedures:

As with most things that come built-into the operating system, there are limitations in what’s built into Windows. Most notably, the monitoring and reporting side is extremely weak, and there are also several gaping holes in terms of hardware support.

Monitoring and reporting Hardware support Selection of items to backup

These matters are discussed further in the articles on this website. All of these limitations are addressed by the 3rd party product called BackupAssist.

The major functionality available in Windows Server Backup is undoubtedly the hardware independent server restores from bare metal. In previous operating systems, to achieve this, you’d have to spend thousands of dollars on 3rd party imaging solutions. Now, it’s free.

However, there are a considerable number of limitations that can only be overcome by extensive scripting and manual scheduling, or by using a 3rd party product like BackupAssist.